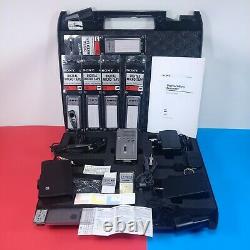 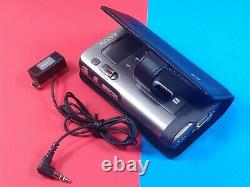 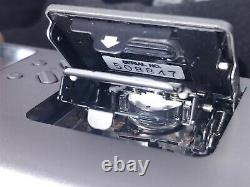 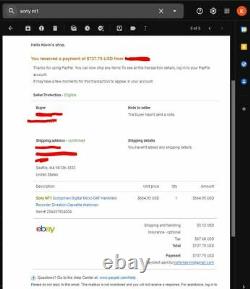 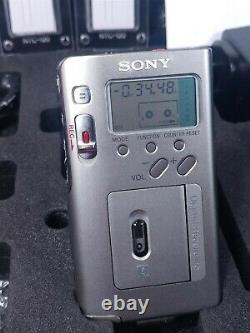 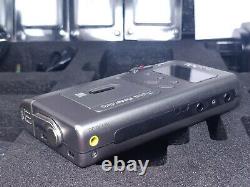 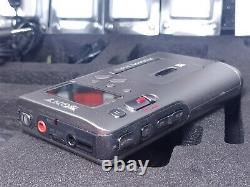 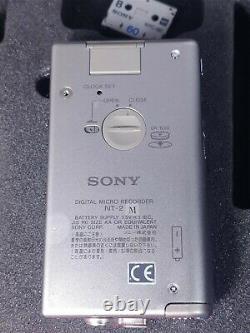 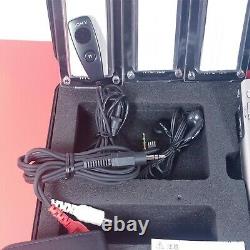 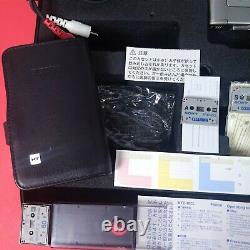 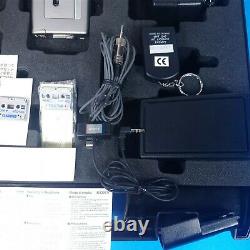 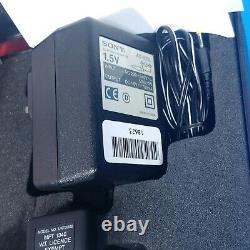 Up for sale is the second of the two Sony "Scoopman" Nanocassette recorders I've acquired, from my personal tape collection. These were my holy grails as many people who are into tapes don't even know this format of cassette from the early 1990s exists and they were only marketed to a very specific audience of professional user. Only two models were made that used this type of tape. Two demo videos of this unit are posted to Youtube. The first video is a walkthrough of the bundle and shows all angles of the recorder, playback, condition. The second video is a demo of recording some music into the recorder, then playing the tape back.

This is arguably the nicer and more fully featured of the two models of cassette recorder that were ever made to use "Nanocassettes, " which are an extremely small format of Digital Audio Tape, even smaller than Microcassettes. The tapes measure about an inch across and can store up to 2 hours of high quality digital audio with datestamps. This recorder was previously owned by a UK company that did undercover reporting and recording.

The briefcase was furnished by David Horn Communications a (still active) company that provided equipment for this sort of thing. The Sony Scoopman recorders were among the first high quality truly portable digital recorders made in the early 1990s and were only available through specialist dealers; often used by journalists, spies, law enforcement, and concert-tapers. The recorder is serial number 508847. Only a few very tiny scratches that are visible when viewed up close in the light.

The motor/tape transport mechanism works perfectly without any issues. Recording, playback, rewinding and fast forwarding are all very smooth and accurate. The tape compartment is spotless inside and doesn't exhibit any signs of heavy use. The battery compartment has no corrosion. The transport buttons are surrounded by a small section of that annoying rubber which was so common on handheld electronic devices in the 1990s, which breaks down and becomes a little sticky over the years.

My Sony NT1 was much stickier but this NT2 is just a little tacky there. It doesn't interfere with holding the unit or pressing the buttons and you barely feel it unless you're trying to.

The Line Input jack is a little finicky; depending on your 1/8 cable you connect, you may experience the right stereo channel lose some volume. Making sure the cable is inserted fully and perhaps has a little pressure towards you prevents this, or using some contact cleaner, etc.

The Microphone, Headphone, and Line Out jacks work as they should. You can see in the demo video that recording even levels on both channels was fine for me. This bundle includes several extras. Original case, which has a snap-in button to secure the recorder to the case.

Original Sony wired lapel microphone with swivel clip. Wired remote control with Record and Pause buttons. The record button has a small fuzzy sticker over it so that you can feel the button within your pocket easily. This was done for covert recording purposes.

Original Sony UK Power Adapter. You won't need this most likely, as it can run on a single AA battery.

The gray one on the right side of the briefcase. One used test cassette, 1 hour per side for 120 minutes total length. 5 never used blank cassettes, also 120 minute length.

Several stickers for labeling tapes. Complete re-print of user manual. Custom foam fitted briefcase by David Horn. Also some somewhat unrelated items are included, which came with the recorder when it came into my possesion. A wireless remote keyfob to a car. I believe this was an aftermarket that was set up for a Mercedes Benz but that was so long ago. The only thing that shows up when Googling the number on the back is some kind of case in Delhi District Court.

A mysterious small black box that takes batteries and previously had adhesive on the back that was torn off. There is a foam cutout fitted to this but I'm not sure what it's for. I believe it's some kind of alarm or tracker.

See below for more information on this rare cassette tape format. These cassettes were certified as the worlds smallest tapes for digital recording in the 1994 edition of the Guinness book of world records. The NT-1 represented all that a portable tape recorder should be.

This light and compact unit offered excellent sound quality, extended recording, and good energy efficiency. Built around the microcassette layout, it was designed for easy one-handed operation. In appearance, the Scoopman is appealingly simple.

SONY TO BEGIN MARKETING `SCOOPMAN' MINI RECORDER. Jan 18, 1992, 12:00am MST. The Scoopman is not likely to compete head-to-head with other new digital recording formats because it is expensive and aimed mainly for recording meetings or news events - thus its name. The sound quality isn't quite as good as other digital formats, but the Scoopman wins the undisputed featherweight title at 5.2 ounces, battery included. In a recent demonstration, the Scoopman played surprisingly beautiful, hiss-free classical music for its small size. Overall, it measures 2.1 inches by 4.4 inches by 0.9 inches. 21 in Japan and at a later date overseas, Sony said. The small size results from use of new technologies. Digital audio tape recorders now use spinning heads that record a series of lines on a tape, similar to a video cassette recorder.

This requires high-precision tracking and accurate alignment between the tape and head. The new Sony digital recorder also uses a spinning head, but traces each line several times during playback. The digital information from the tracings is combined in a semiconductor memory which permits high-quality playback even if each tracing isn't completely accurate, Sony said. That allows the new tape recorder to use a much simpler tape alignment and loading system.

Sony officials say its specially developed integrated circuits contain the equivalent of 1.8 million transistors. The Scoopman has a frequency response of 10 to 14,500 hertz and a dynamic range of more than 86 decibels, Sony says.

NT was a digital memo recording system introduced by Sony in 1992, sometimes marketed under the name Scoopman. The system stored memos using helical scanning on special microcassettes, which were 30 × 21.5 × 5 mm with a tape width of 2.5 mm, with a recording capacity of up to 120 minutes. The Scoopmen cassettes are offered in three versions: The Sony NTC-60, -90, and -120, each describing the length of time (in minutes) the cassette could record. NT stands for Non-Tracking, meaning the head moves at a shallower slope to that of the tracks on the tape, crossing several during each pass, albeit only reading partial data from each one.

By making several passes it is possible to reassemble the complete data for each track, in memory. This considerably reduced the complexity and size of the head, and, therefore, the recorder. Another feature was Non-Loading, which meant instead of having a mechanism to pull the tape out of the cassette and wrap it around the drum, the drum was pushed inside the cassette to achieve the same effect.

Audio sampling was in stereo at 32 kHz/12 bit and encoded using a form of linear delta modulation called LDM-2. The Sony NT-2 Digital Micro Recorder featured a real-time clock that recorded a time signal on the digital track along with the sound data, making it useful for journalism, police and legal work. [1] Due to the machine's buffer memory, it was capable of automatically reversing the tape direction at the end of the reel without an interruption in the sound.

[1] The recorder used a single "AA"-size cell for primary power, plus a separate CR-1220 lithium cell to provide continuous power to the real-time clock. [1] The Sony NT-2, an improved successor to the Sony NT-1 Digital Micro Recorder, introduced in 1992, was the final machine in the series. The NT cassette systems cost more than a DAT recorder in their day, were fragile and relatively unreliable compared to other emerging recording technologies, and being unable to compete soon disappeared from the market.