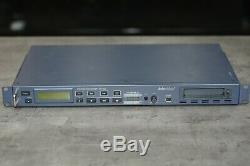 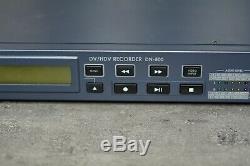 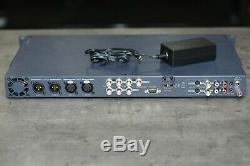 Datavideo DN-500 DV/HDV Recorder/Player The Datavideo DN-500 is a rack mountable digital video recorder and player designed to record in DV and HDV. Gone are the days of a costly tape-based workflow, which usually wastes hours of valuable time logging and capturing. Simply hook the DN-500 to your non-linear editing workstation and, voila--ready-to-edit footage at your fingertips. The DN-500 is a rack mountable version of the DN-400 taking up only 1RU in any standard 19 system.

The unit is ideal for small studios and editing workstations. Interchangeable Drives The deck uses a specially designed 250GB interchangeable drive, making it easier to capture large volumes of footage without having to dump to an external storage device before reusing. Simply pop out the full disc and throw in another!

Native DV and HDV Support The DN-500 has been built to meet the growing demand of high definition videography. The unit has complete native support for the HDV format as well as being capable of legacy recording of standard DV. Loop Playback The DN-500 can be used in promotion applications by using loop playback. The feature allows users to loop video clips seamlessly, making it ideal for commercial environments.

The recorder supports most non-linear editors, including Apple Final Cut Pro, Adobe Premiere Pro and Avid. Dragging footage onto your timeline couldn't be easier! Just drag and drop files from the drive to your computer (PC or Mac) in seconds.

AVI with the push of a button. The item "DataVideo DN-500 DV/HDV Digital Video Recorder/Player" is in sale since Sunday, August 11, 2019. This item is in the category "Cameras & Photo\Video Production & Editing\Video Recorders & Players".